There is a newer product in the Canadian market place to treat head lice! It’s called NYDA® and there are a couple things that make it different from the products we have been using to treat head lice. Unlike Nix® and other products, it is not insecticidal (it does not contain chemical pesticides), but works by suffocating the lice (sounds terrible but read on!). It can also be used if you have an allergy to ragweed or chrysanthemum, something we would have to be cautious about when using Nix®. NYDA® has a pleasant smell and is generally well tolerated. 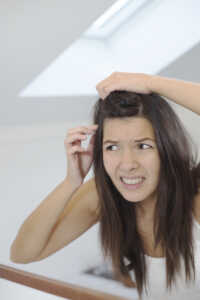 How does it work?

Head lice (also known as Pediculus humanus capitis), live on the scalp and lay eggs at the base of the hair. These pesky parasites feed off human blood and cause itching and irritation of the skin. They are most commonly spread among children, who are exposed to infection at school.   Lice breathe by exchanging gases and releasing water vapour through holes (or spiracles) on their body (outside shell)1. NYDA®’s main chemical ingredient is called dimethicone which blocks these holes and stops lice from breathing (exchanging gases), causing the lice to suffocate or rupture due to water build-up2. NYDA® also blocks the air holes of eggs, and kills the nits – making it ‘ovicidal’. NYDA® works differently than other treatments for lice and is not a pesticide (no harmful chemicals) – it doesn’t sound too friendly, but sometimes drastic measures need to be taken in order to get rid of the lice!

How do you use it?

Spray a generous amount NYDA® onto dry hair in the evening and massage it into the scalp until it is covered. After leaving the solution on for 30 minutes, comb through the hair with a lice comb to remove any lice or eggs from the hair and allow the solution to dry overnight then rinse NYDA® out with your regular shampoo in the morning. Cover your pillow with a thick towel before going to sleep to keep it from getting dirty.  NYDA® kills most lice and eggs within 8 hours after the treatment. Repeat this process in 8-10 days to ensure all live lice and their eggs have been removed3.

What does the evidence say?

Permethrin is the main ingredient of Nix® and is usually the “go to” product for getting rid of lice; however, there is increasing resistance to these products which is making them less effective.  In studies comparing NYDA® to another lotion containing permethrin, NYDA® was shown to work faster and more effectively after both the first and second treatment4,5.  NYDA®’s cure rate is generally said to be around 97% 2.

Being a new product, evidence regarding its safety is limited and drug interaction studies have not yet been performed. Mothers who are pregnant or nursing should use with caution. It is not recommended to be used in children under the age of two3. It is only to be used externally and patients should avoid contact with the eyes, nose, and mouth. Never inhale NYDA® and rinse for 10-15 minutes if the product comes into contact with the eyes. NYDA® is an aerosol spray, so keep it away from heat or an open flame, as some of the ingredients are flammable. Spills should be cleaned immediately due to risk of slipping. As of now, it shows no signs of toxicity and is generally thought to be safe3.

NYDA® may be a more effective alternative to Nix® or other products that have permethrin as their main ingredient due to a growing resistance with permethrin. It may also be safer because it is a non-insecticidal chemical (so it is not toxic!) and can be used if you have an allergy to ragweed or chrysanthemum. There are currently no major side effects listed or concerns with toxicity or resistance. However, it is a new product and should be avoided in pregnant or lactating women and in children under two years of age until more evidence becomes available.

Folic Acid: Why is Folic Acid Important during Pregnancy?