Many of us have developed scars over our lifetime.  These scars may represent memories, warrior wounds, or marks that we wish we could get rid of!  For those of us wanting to get rid of these marks, wouldn’t it be nice if we could get rid of scars we no longer wanted to see in a painless and an affordable manner? There have been many claims that the use of vitamin E cream helps to heal scars and improve the look of burns, stretch marks and other wounds1. We decided to look into this claim and explore whether vitamin E cream really works wonders on scars, or if it is too good to be true. 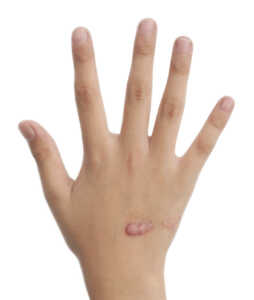 Vitamin E was discovered in 19222. It is the generic term for a group of chemicals synthesized by plants and other photosynthetic organisms like algae1. Vitamin E is a major fat-soluble antioxidant in skin1. Since its discovery, researchers have thought it could be used as a treatment for scars2. Scars are the skin’s way of repairing itself after injury2. The skin does this by synthesizing collagen – a tough, white, fibrous protein that acts like a bridge to connect the broken tissue1. There have been claims that vitamin E speeds up the healing of wounds and enhances the look of scars1. Many health care professionals recommend the use of vitamin E cream after skin surgery1. It can be applied on the skin in the form of a cream and will penetrate into deeper layers of the skin2. Vitamin E cream can be found in any pharmacy and many shops that sell creams and lotions. It comes in many different brands, strengths, and preparations, all of which may function in slightly different ways3.

How Does it Work? – The Claim

The body uses complex mechanisms to repair injuries, depending on the type and severity of these injuries3. Likewise, vitamin E’s effects during the healing process are also complex3. Its effects may vary depending on the wound type and vitamin E preparation3. Vitamin E acts as an antioxidant by protecting the body from the effects of damaging oxidants (also known as ‘radicals’)1,2,3. These radicals damage the cells in the body, and are released by white blood cells (the body’s protective army) when the body is injured1. Radicals can slow the healing process by damaging DNA, cell membranes, proteins, and fat, which ultimately alters the creation of collagen in tissue1.  Although it is believed that the antioxidant effect of vitamin E may reduce scarring, the way it works is still not fully understood.

What Does the Evidence Say?

Studies looking at the effect of vitamin E on scars have shown both success and failure. In a surgical study, applying vitamin E on a silicone pad to a wound improved the cosmetic look of scars after 2 months4. A study of rats also showed that after treating with vitamin E, scars were smaller in size after only 10 days5.

On the other hand, several studies have shown that vitamin E is ineffective in scar reduction. Baumann and Spencer (2001) looked at the use of vitamin E cream in 15 people after facial surgery1. After 3 months, they found that in 90% of people, vitamin E cream did not improve or the scars worsened1. In a randomised study of 159 people with burn scars, 45 people were treated with vitamin E cream for 4 months. One year later, the scar thickness and scar appearance in the vitamin E cream group was the same as people who did not use vitamin E cream6. Vitamin E cream used after reconstructive surgery on burn-victims has not been shown to effect scar thickness or overall cosmetic appearance a year after surgery7.

Vitamin E is generally safe; however, some of the safety concerns reported are local reactions on the skin.  These include classic allergic skin reactions such as contact dermatitis, itchy hives, swelling and eczematous dermatitis1,2,3,6. In some cases, Vitamin E worsened the appearance of scars2.

Researchers have proposed the use of vitamin E in the healing of scars ever since its discovery as an antioxidant in skin. Surprisingly, the results are conflicting and it isn’t strongly supported with evidence.  The side effects are mainly local (on the skin where the cream is applied).  Bottom line, not a highly recommended product for scars as the evidence is lacking.

Sebcur®: Will Sebcur Secure Your Safety From Seborrhea and Dandruff?